The Saving the Martyrs’ Legacy project was established in 2013 by members of the local community as a way of saving this ‘at risk’ historically important former chapel.

During 2015 and 2016, with the support of the Heritage Lottery Fund (HLF), Architectural Heritage Fund, Dorset County Council and West Dorset District Council, project development and design work progressed. Consultations were held with local residents and visitors to the annual Tolpuddle Festival, resulting in good feedback on the proposals and strong support for the project.

An HLF round 1 Heritage Grants application was submitted in May 2016 with a positive decision received in September and development funding of £63,700 confirmed and a grant of £329,300 was awarded towards delivery costs of £600,000.

This funding allows the Trust to produce detailed plans for the renovation and repair of the former chapel, as well as creating interpretation and community engagement activities to tell the history of the building and its connection to the Dorsetshire Labourers, who later became known as the Tolpuddle Martyrs. 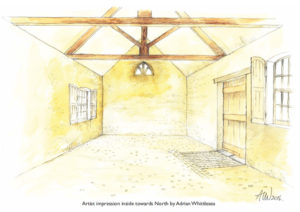 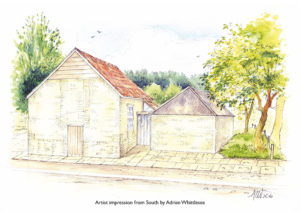 Renovation proposals for the former chapel – 2016

Tolpuddle Old Chapel Trust have successfully raised over £650k to restore the Old Chapel, including a grant of £329,300 from the Heritage Lottery Fund.  Work will begin on site in Spring 2021.  Fundraising continues with a current fundraising target of £26,000 to complete the works.

The development of the former Chapel will also help to enhance the visitor and tourist experience as part of the ‘rural life’ heritage corridor linking Dorchester with Hardy’s Birthplace, Athelhampton House and Tolpuddle.